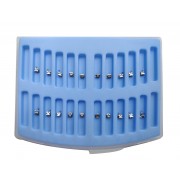 Self Ligation Orthodontic Brackets is defined as the brackets which use a slide or clip to maintain the arch wire in the slot. Self-ligating brackets (SLB) were developed on the premise that elimination of ligature ties creates a friction-free environment, allows for better sliding mechanics, and may therefore reduce treatment time Self-ligation was introduced in 1935 (Stolzenberg 1935), however it is only more recently that there has been a renewed interest in the use of self-ligating brackets. They reduce the amount of pressure and friction on teeth of the patients.

Self Ligating Brackets are classified as:

Active brackets will use a thicker archwire and will deliver more pressure onto teeth, thereby moving them more efficiently to where they ideally should be.They have a spring clip that stores energy pressing against the arch wire for rotation and torque control in larger dimension arch wires.

Passive brackets are applied and use a smaller size archwire. The smaller archwire creates less friction and will allow your teeth to move more freely. Your orthodontist will most likely use this application at the beginning of treatment. They have usually have a slide that can be closed without exerting an active force on the arch wire.

WHY SELF LIGATING BRACKETS OVER CONVENTIONAL BRACKETS?

Lower Friction Rate than all the other brackets: