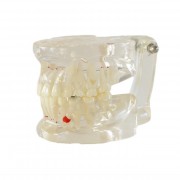 WHAT IS MIXED DENTITION STAGE?

There are 32 permanent teeth and those of the maxillae erupt in a different order from permanent mandibular teeth.

The order is as follows: