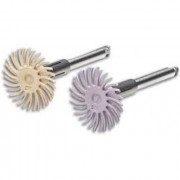 Sof-Lex™ Spiral Finishing and Polishing Wheels are a unique two-step, single use finishing and polishing system. The flexible shape of the wheels allows them to adjust to the contours of a tooth surface – even if the tooth surface is irregular, concave or convex in shape. This means you can now polish anterior and posterior restorations with one versatile tool... So why use points, cups, discs and brushes when one shape will do?